* The name "Plethro" comes from the conversion of the word "Plithra" (in Greek Πλίθρα) which means adobe dried through physical processes. 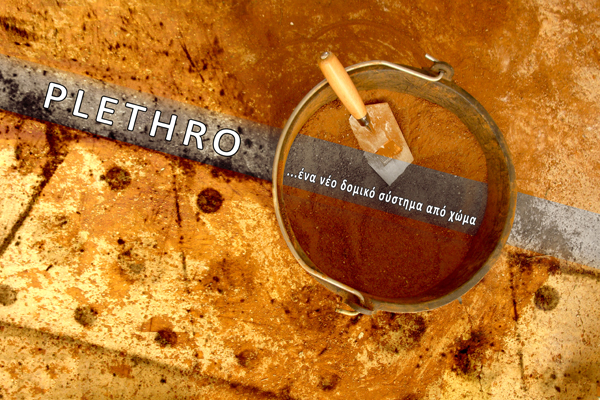 Problem ... construction waste
Constructions absorb 40% of produced energy and 16% of annual water resource on earth (Sargentis, 2005). In European Union, for instance, the entire structural sector is responsible for the 40% of the total waste produced (Giannakopoulou, n.d.). In Greece, it is estimated that more than 200 million tones are produced annually at the construction sites and only 25% of them can be recycled (Adamopoulou, 2013).

Vision ... Building with raw earth
This thesis envisions the realization of an ideal and balanced relationship of the human kind with the planet earth. The appropriate use of natural resources is of major importance for the development of human communities and their sustainability. Undoubtedly, an improved relationship of human beings with the rest of ecosystem is not only necessary but also attainable.

Even nowadays, earth is the second most popular construction material in the world after bamboo, and more than 30% of world population lives in houses made from raw earth (Berge, 2009).

The use of natural materials for building purposes, such as raw earth, is most achievable considering that more than half of the world population lives in agricultural areas and in low rise buildings. The requirements of such buildings can be fully met through the use of such materials. The low technology but high engineering will improve the quality of life and set the foundations of an improved relationship with the environment.

Proposal ... the structural system "Plethro"
Plethro consists of four building units. The raw material is earth and its weight does not exceed 9.5 kg. The units can be combined in angles of 90o and 45o, and connected to form linear parts as well as polygonal pillars. They can also form floor structures in combination with wooden beams. Wall thickness is either 30cm (single wall) or 60cm (double wall), and the structural behavior of the first has been simulated in the laboratory* and proved capable to meet the requirements of a two-story building.

No mortar is needed and the stabilization of the wall occurs with the use of wood or metal horizontal frames. They are placed vertically every 80cm, and connected and stressed with each other with metallic bars. The foundation, on which bars of the first frame are stressed, can be made either from reinforced concrete or reinforced masonry. Vertical air ducts are created which allow the air flow and the electromechanical installation.

* The simulation control was conducted by Vαngelis Liarakos at the Applied Engineering Laboratory at the Technical University of Crete and applied on budging material of  3 (MPa) and 19.6 (kN/m3)

Results ... environmental benefits
During the thesis, effort has been made to compare the structural system Plethro with the conventional systems of construction as far as the economy and the environment are concerned. This was done in order to ensure the ecological character of the system as well as its industrial sustainability. The comparison was conducted in relation to the contained energy of the main structural materials that are used for the construction of a house. Even though it is a small part of the whole life span of a building, the outcome was promising. The construction of a house with the structural system Plethro is estimated to consume 84% less energy and to produce 69% less CO2 than the conventional structural system. In addition, they are saved 5.3 tn of water per 1 m2 of building*. 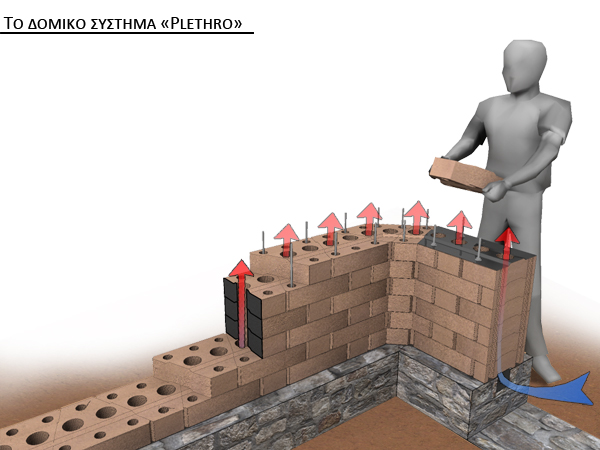 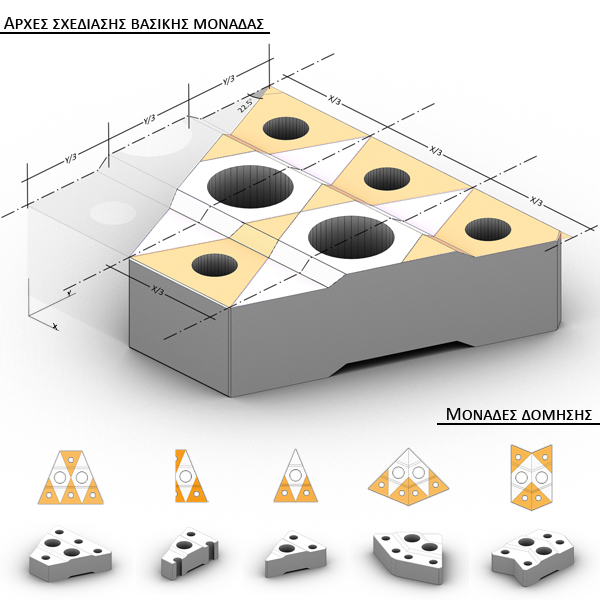 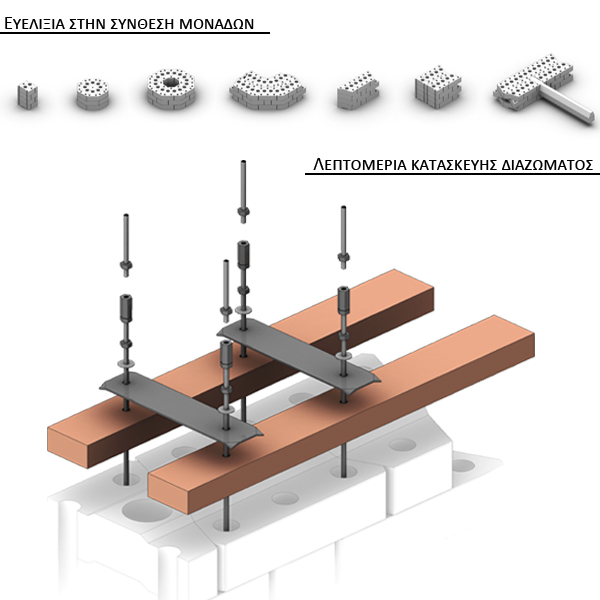 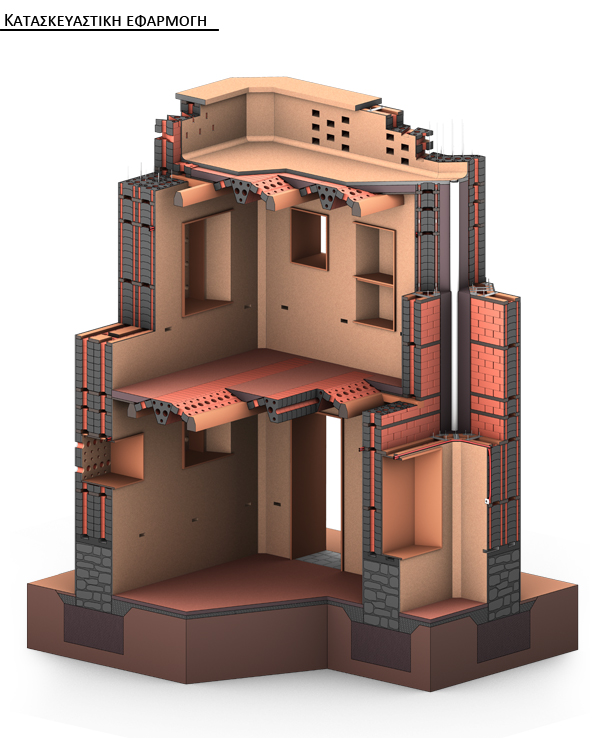 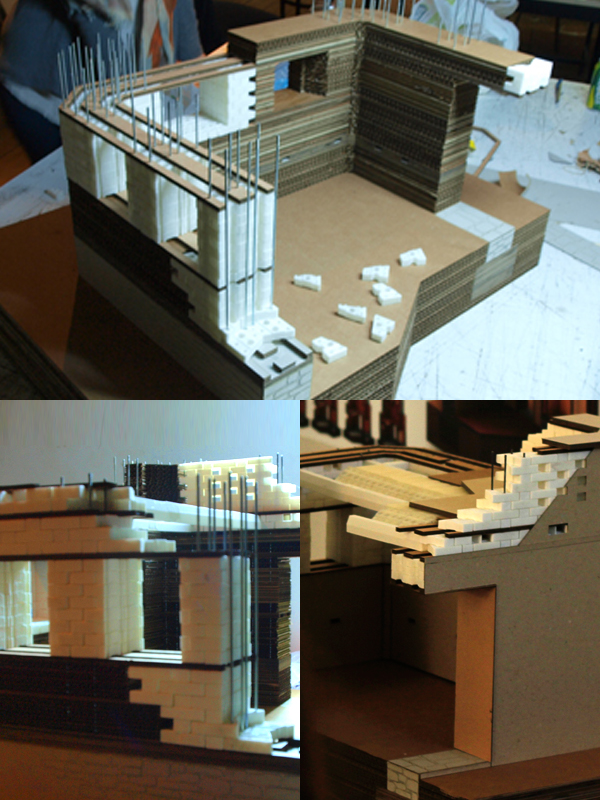 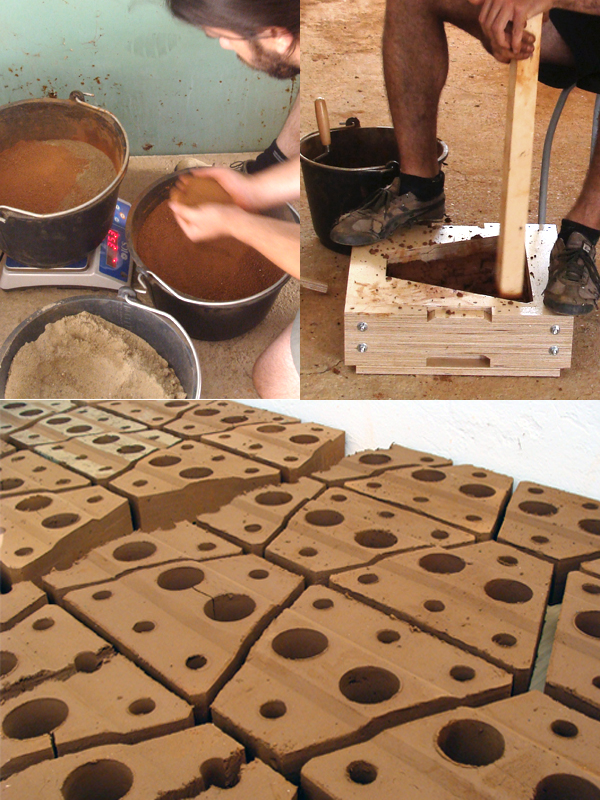 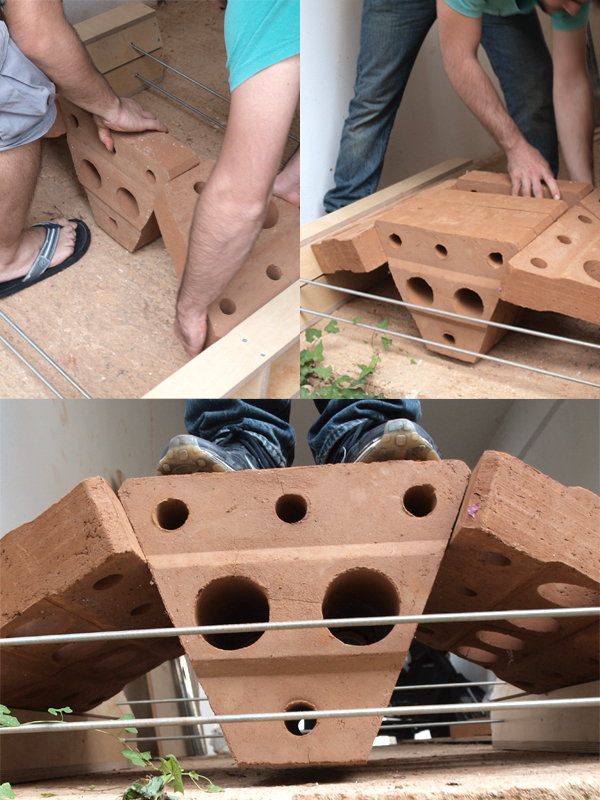 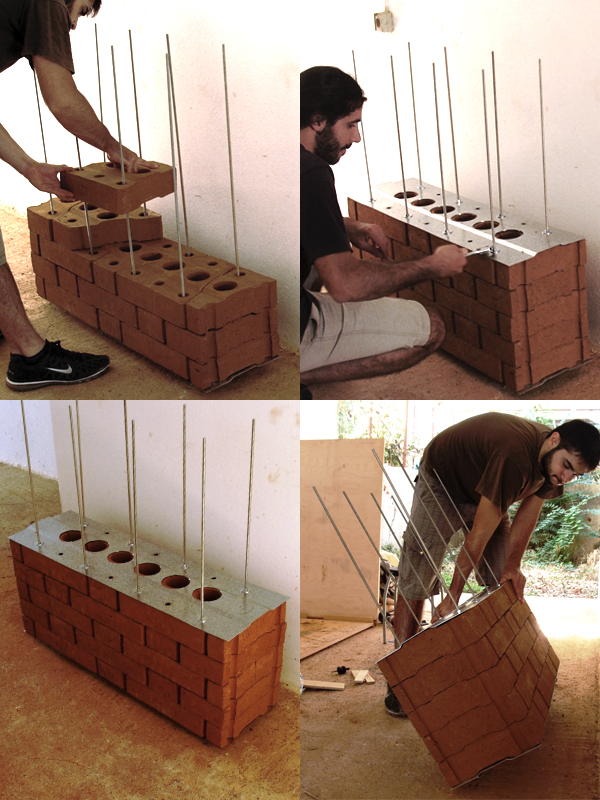